We see all beings and ourselves as a part of a totality and gain a deep understanding of others' experience through this insight and realization. 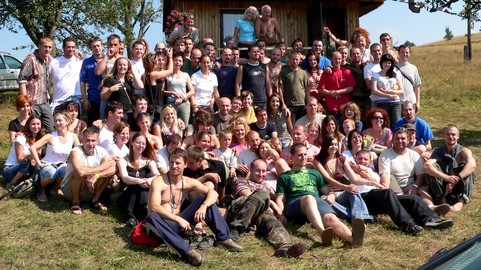 During the last few decades Diamond way Buddhism has spread outside the borders of Tibet thanks to the activity of H.H. the 16. Gyalwa Karmapa Rangjung Rigpe Dorje (today H.H. the 17th. Karmapa Trinlay Thaye Dorje), Lama Ole Nydahl and other lamas, teachers and students. All over the world they have founded hundreds of buddhist centers following the Karma Kagyu lineage (by now there are over 650 centers around the world). Buddhist centers are places where modern and independent people have the possibility to meet timeless teachings about the nature of mind which lead to lasting and unconditioned happiness. Slovakia was among the last countries where Diamond way Buddhism appeared. However, it has been developing very fast recently.

The first Slovak buddhist centers and meditation groups started to emerge around the year 1996. Today there are 15 centers and meditation groups where approximately 300 people meet and make use of the buddhist methods to discover limitless qualities of mind for the benefit of all. Buddhists centers do not have either a hierarchy or an organizational structure. They are not influenced by culture and politics and are focused on using Buddha`s teachings in everyday life. The basis for their functioning is friendship and the idealism of those who in addition to their own practise, contribute their time and energy to the development of Diamond way Buddhism in Slovakia and abroad.

Our further activities include:

All of these activities are run under the civil association Diamond way Buddhism Association - Karma Kagyu.